Depend upon their chiropractors to be able to compete. Our conservative care (no drugs or surgery) not only rehabilitates their injuries when they occur, but also increases their bodies' ability to perform better, by enhancing the brain's communication, through the nerves, to every muscle and joint in the body.

Published in the Journal of Chiropractic Research and Clinical Investigation reported that chiropractic care of athletes could improve their athletic performance by as much as 16.7% in just two weeks! Athletes who were adjusted by chiropractors to remove any nerve disturbance in their spines, but didn't change anything else in their diet or training regimen, reacted faster, had better coordination, could execute fine movements with more accuracy, and became better athletes overall!

(seven time Mr. Universe and movie actor): "I have now become like a spokesperson for chiropractic. So many people come up to me because they know I am a big believer in chiropractic... I just had another skiing accident up in Sun Valley and I really couldn't move. And I again had one of those miracle moments when you call a chiropractor, they care for you and give you adjustments and then days later you ski again like a champion... another personal experience with proof how great chiropractic is."

(tennis star): In 1992 she was hit by a tennis ball near her left eye. Soon after that match, her left elbow began to hurt and continued to worsen until by the end of the year she could barely serve a ball. She finally sought treatment from a chiropractor, and after one visit (the doctor never touched her elbow, she only rendered adjustments to her neck) the pain vanished and never returned.

(Superbowl champion quarterback): "I've been seeing a chiropractor and he's really been helping me out a lot. Chiropractic's been a big part of my game." Joe Montana and the entire San Francisco 49er's got adjusted regularly, and just before each Superbowl game.

(world heavyweight boxing champion): "I have to have an adjustment before I go into the ring. I believe in chiropractic. I found that going to a chiropractor helps my performance. The majority of boxers go to get that edge."

(world's greatest athlete - Olympic decathlon): "You obviously can't compete at your fullest if you're not in alignment. And your body can't heal if your back is not in alignment. It was the holistic idea that I liked about chiropractic and that is what track and field is about. Every trach and field athlete that I have ever met has seen a chiropractor at one time or another. In track and field, it is absolutely essential... I think I compete eight to ten percent better from regular chiropractic use. I think that is how much of a benefit it is , if not more!"

THROUGH NATURAL METHODS, IT IS POSSIBLE TO USE THE SPINE AS A GIANT SWITCHBARD FROM WHICH ONE CAN AFFECT EVERY NERVE, MUSCLE, ORGAN, GLAND AND CELL OF THE BODY

Dr. Salmi has been helping Pacific Luthern students and other athletes since 1997. Call today and schedule an appointment to discuss how to improve YOUR game. Located right across from PLU on Pacific Avenue. Acts Chiropractic Center is centrally located and serves the South Parkland, Parkland, and Spanaway communities. 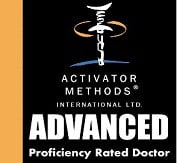